Some statistics from the past year. It costed me at least 3 hours collecting all the infos ;)

This year I subscribed for 20 races. I started and completed 19 of it. This coveres a distance of totally 210 km and a time of 12 hours and 24 minutes. Which gives a theoretical average pace of 3:33 min/km. 4 out of this 19, were Pacemaker or Training Runs. The positive altitude difference was a total of 2460m. The most races I finished in July and September (each month 4 races), in December I did no race at all.

16 were on roads or paths, one was on the track, one on snow and one was a staircase run. Two of it were mountain/trail runs and another two were on the coast of a sea. The hottest race was the Firmenlauf Basel with 31°C in July in the evening at the start-line, the coldest was the Arosa Snow Run with 1°C in January in the morning at the start-line. The most races were done either on Sunday (8x) or on Saturday (6x). 11 competitions were in Switzerland, two in Germany and one each in Spain and Croatia. 7833 people finished at the 10k in Valencia, followed by the Greifenseelauf with 5779. Only 49 people finished at the the Roche Tower Run.

Overall I completed 4x a Half-Marathon, 1x 10 Mile, 4x 10km and 1x 3km. In the Half-Marathon I ran 3x Personal Best, 1x in the 10 Mile, 3x in the 10km, 1x in the 3km. Totally 8x PB. If one skips the Pacemaker-Half Marathon and the 10k at Hallwilerseelauf, which cannot be taken in account for a PB because of the negative altitude, I ran consistently PB over these distances in 2016. The other distances were 2x between 15-20km, 5x between 5-10km and 1x below 5km.

In the rankings overall I earned two victories at the Roche Childrens Run and Basel Marathon Relay (Team), 3x a 2nd place and 4x a 3rd place. The other rankings were 6th (3x), 7th, 18th, 36th (leaving out all pacemaker/training runs). In the age category (if present) I earned one victory at the Leimentaler Lauf, 2x 2nd place, 3x 3rd place, 2x 4th place.

My fastest kilometer was the first one in the 10km Hallwilerseelauf with 03:01 (on the road with a slope of -13m).

My slowest kilometer was the last one at the Arosa Snow Run with 14:27 (on the trail with a slope of +130m)

In 2016 I ran a distance of 3080km. Overall I did 251 runs (including competitions and recovery runs). This gives a theoretical distance of about 12km per training. In avereage 59km and 4.8 runs weekly. Due to the app this is the equivalent of 865 kilokaleries. My longest run was the Long Run in Mallorca with 37km, where I missed a turn. The longest run in terms of time, was in the Engadin up to the top of the Piz Languard with 2hours 36 min. This has also been the run with the most positive altitude difference.

Besides this I went 6x biking, 27x swimming and did 94x strength exercises. 19 strenght trainings were combined with running and therefore counted also as a run. 72 days I took off (meaning no sport activities), the first day of the year was such a day. 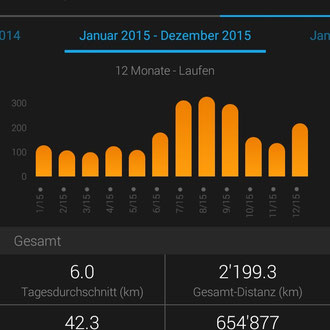 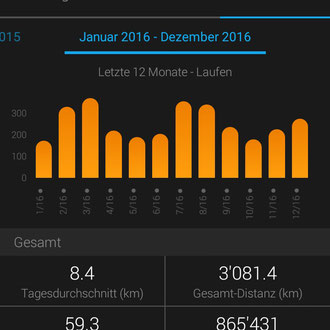 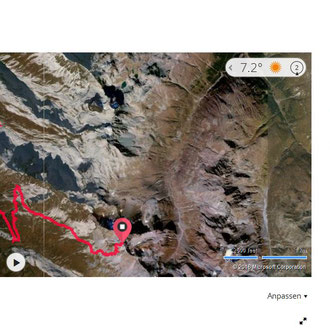 2015: A perfect shaped curve indicates the preparation for the first marathon for end of September, with a training plan. Before, the volume lied around 100km per week.

2016: Illness in January, an injury between April and May indicates no clear build-up. Lower volume in May and October. Also the training camps in February and July can be seen.

Piz Languard: The longest run in 2016 in terms of time. Also the most elevation gain in a single exercise. Besides this, one of the most beautiful runs I memorize for the past summer.

All the content published on this page (e.g pictures) are owned by David Keller

Unauthorized use is prohibited and can lead to prosecution