The World Half Marathon Championship were held last Saturday in the city of Valencia/Spain. For me, this had been a great last opportunity to test my fitness level and... on the other hand, enjoy a nice weekend together with my friends. After a two-hour flight on Friday, we were welcomed with some advertisement for the event at the airport. This weekend everything was set for a successful championship. Next to 300 elite runners which were sent by their countries to do so, around 12000 people like us joined for the amateur mass race. Luckily we had Salva who drove us directly from the airport to the city. He was our guide for the following days.  Before dropping our luggage in the apartment we directly enjoyed some nice local food: Paella Valenciana! Next step: pick up the race bibs in the center of arts and sciences with all its fancy buildings. After a quick easy jog around the city, it was already late and we were ready to go to bed. My legs felt better now as I could still feel the Long Runs toll until Thursday. 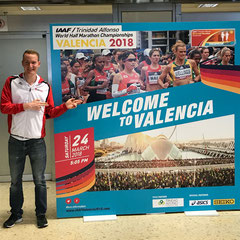 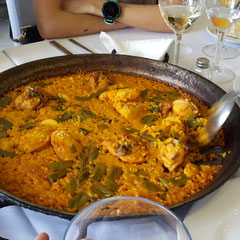 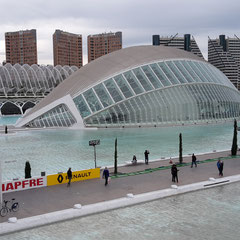 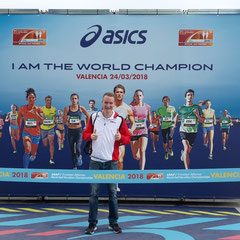 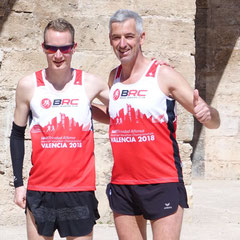 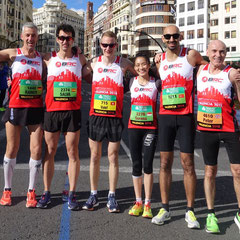 Saturday - race day. A nice bright sunshine brought me in a good mood on this late morning. Until the Half-Marathon started at 5.30pm we still had plenty of time. After a big breakfast, we enjoyed the good wheater on the rooftop. Together with my coach Rainer I did again a short jog of around four kilometers with some accelerations. "What is your Half-Marathon-pace?" - I didn't set a goal yet, but a time under 1:11 should be possible so I said 3:20-pace. I would go out like this and then see how I would feel for the later stages. We were already aware of the strong wind blowing from time to time, and until evening it should be even worse. The disadvantages were for sure the wind and that I wasn't prepared and tapered for this Half-marathon. The advantages were the completely flat course all on asphalt and the massive amount of runners where I can join a group.

At 3 pm we had our lunch, a mandatory portion of pasta in an Italian restaurant. Not too big and easy to digest. Everyone of us calmed down and prepared the race gear. Because the last part of the course (blue line) was directly in front of our apartment, we did our warm-up from there directly to the finish line and captured the last team-photo. 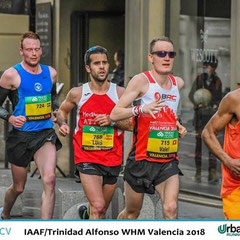 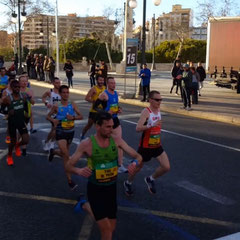 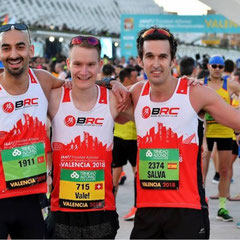 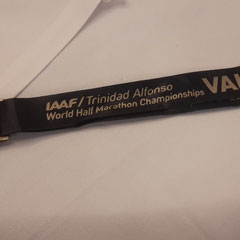 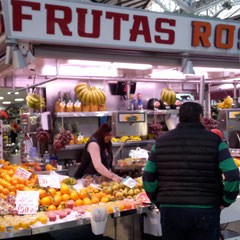 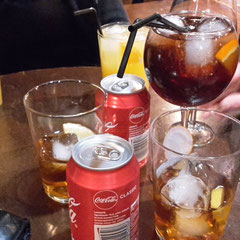 At 5.15pm the World Championship Elite woman race started, the men would join the mass race. I was standing directly in the box behind them together with approximately another hundred sub1:12 runners like Armin Flückiger and some of the 2016 European Team Half-Marathon Champions from Switzerland: Christian Kreihenbühl, Adrian Lehmann, and Andreas Kempf. Next to me was Javi, who I just meet a few minutes ago. A local runner which wanted to go for a 1:11.

As the gun went off we crossed the bridge in direction to the harbor. The pace was high, some of the runners tried to close the gap between the elites and the mass race (we crossed the arch around 10 seconds behind them) whereas everyone els tried to find his position. After the first kilometer in 3:11 I realized that I've been a bit too fast but afterward I managed to settle down and crossed 5km in 16:46 (16:36 from the starting line, which I did not know at this stage) which was exactly what I was looking for. Even after 5km, there were no clear groups formed, the density of good runners was so high that we were running behind each other like a chain. This was also the point where a strong headwind came up and I think I lost Javi. Suddenly people slowed down a bit. Gaps opened and groups formed. Thus I needed to decide, stay in a group or fight alone against the wind? I decided for the first, to save some energy. Additionally, a short but heavy rain went down. Naturally, nobody in the pack wanted to run in the front to play the protective shield, so I found myself running one km in marathon-pace behind the group. At this moment I was a bit disappointed, but I remembered that it was still early in the race and that the last third is going to be the most important as it always has been.

After the rain, the wind stopped for a moment and the people suddenly pushed again. The road was a bit slippery, not sure if it was only me because I thought my continental soles could withstand wet roads. Luckily it dried quickly, but there were another rain and a strong wind coming. This time I also helped at the front of the pack because I did not want to slow down too much again and the poor tall Swedish guy did most of the work there. My next 5km-split was 16:57, still in the race and know we withstood the harshest conditions. I felt better and better and was still running at the front. we were collecting some faster runners, also from the championship which was another motivation booster. I could have gone a bit faster at this stage, however, I decided to stick with them and push at the last 6 kilometers. It is very comfortable to run in a group, that is what I realized at this point and we were still running nicely around 3:20-pace. At the next drinking station, I took for the second and last time a bottle of water, just to moisten my mouth. Another runner kindly offered me his isotonic drink, no need but pleased how we were helping each other.

The 15km mark I clocked in 50:30 (16:47 for the split). At this point I did not want to spend any effort to calculate and finish time, I only knew that I was still fine and needed to concentrate on the last part. I did not know what it was (an inner voice?) but at a certain point I accelerated and decided to leave the group. Anyway, it had shrunk to a small size and everyone was in his own race know. Perhaps it was the blinding sun which showed up. I still had energy and as I was following the blue line past our apartment my legs did not felt like they should have at this point. 4km was still a long way to go, but the cheering crowd got bigger and bigger and I knew exactly what to expect from the warm-up. I was overtaking few more single runners and it was easy to hang on to the next one in front of me. The final and also the fast 5km-split I crossed in 16:25. Only 1.1 km (1.0975 to be correct, because it is certified by IAFF) more to go and I finished with a sprint in a time of 1:10:20 brutto. Super-happy about my new PB I waited now for Salva and Onur. They finished hand-in-hand with a new PB of 1:22:29. It was freezing cold on our way back to the apartment. After a warm shower and some oranges, we celebrated our achievements with some drinks together with Serena, Peter, and Rainer.

All the content published on this page (e.g pictures) are owned by David Keller

Unauthorized use is prohibited and can lead to prosecution